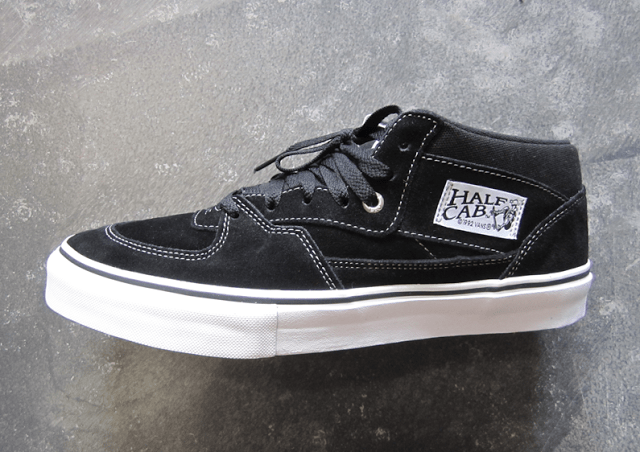 Skate shoe manufacturers come and go and even the big-time players rise and fall in popularity. Not so with Vans. The skate shoe giant has been in the game since 1966 and their shoes are still some of the best and most popular around.

Little has changed with Vans shoes since they first started to be put together. They’re designed and constructed in much the same way and are as solid as ever. The Vans Half-Cab shoes are just about as good as it gets when it comes to skateboarding.

Vans Half-Cab shoes feature a mid-top upper which leads to sorely needed upper ankle support. You’ll be thankful for this extra material as it helps cushion the repeated thrashing that most skateboarder’s ankles experience on a daily basis. At the same time that they’re a mid-top, the Vans Half-Cab shoes also have a low-profile design and look.

Van’s well-known waffle grip soles are another key feature on their Half-Cabs. The waffle grip adds tons of stick to the bottoms of the shoes and helps you ollie higher and stick to your skateboard better. Speaking of ollies, extra padding is built into the fronts of the shoes to prolong their life from repeated abuse from ollies, kickflips, and other tricks that require the sliding of the foot.

Finally, the Vans Half-Cab shoes feature padding throughout without being overly bulky. Are they a slim shoe? No. But they are slim enough to look good with nearly anything and provide the best in comfort.

If you skate, then I say buy this shoe. If you don’t like this shoe, I say buy another pair of Vans. They offer something for nearly everybody.