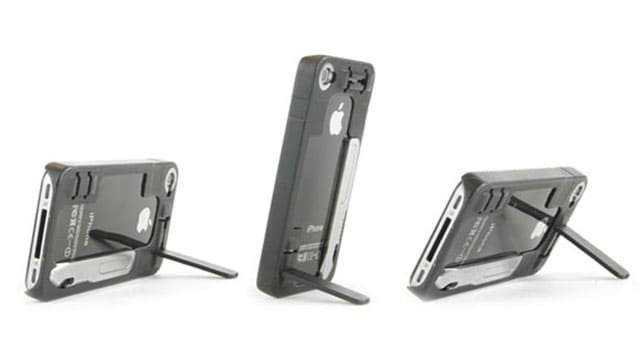 Back in MacGyver’s day, it was easy to carry a Swiss Army knife around. Outside of a wallet taking up a rear pocket, and a pair of keys taking up a front pocket, there was plenty of room in your Levi’s for a full set of disaster-averting tools. Today, a good chunk of that extra space is occupied by a cell phone, and the last thing you need is a heavy hunk of knife smacking against your most useful electronic gadget. The knife may have to stay at home, and you may be left without the tool you need to execute your grand escape from your arch enemy’s death lair.

The ReadyCase packages a few Swiss Army functions into a smartphone-friendly package, updating the multi-tool for the mobile electronics era. Unlike a loose knife in your pocket, which threatens to mar the phone, the case actually protects it. In fact, from the front, the ReadyCase looks like any other protective iPhone hardware. Flip it over, however, and you’ll reveal a series of seamlessly integrated features that make it a whole different kind of accessory.

The ReadyCase gives you extra data storage thanks to a removable 8 or 16 MB USB drive. The USB drive doubles as a kickstand, allowing for both portrait and landscape views. An integrated headphone clip keeps your headphones wound and organized when you’re not using them. A lens ring accepts accessory lenses for photo and video, and the ReadyCase comes with a macro lens, fish eye lens and wide angle lens. What really makes the ReadyCase compare to a Swiss Army knife is the bladed multi-tool with a regular blade, serrated blade, bottle opener and flat head screwdriver.

The ReadyCase is made of a durable “aerospace grade composite materials.” All of the aforementioned hardware is integrated seamlessly into the back of the case, creating a flat profile that measures less than 3 mm thick. The knife is easily removed and can be left home in situations like airplane travel where you can’t carry a knife. IPhone 4/4s and iPhone 5 cases are planned, and the tools are interchangeable between the case bodies.

Okay, so the ReadyCase doesn’t exactly pack all the function of an actual multi-tool, and it probably won’t save your life, whether you have duct tape to complement it or not. Frankly, the knife looks insufficient for anything but scoring a piece of notebook paper. But it is a pretty cool blend of new technology and old-school pocket hardware, and it’s definitely easier to carry around than the average pocket knife or multi-tool. If nothing else, it’s one of those gadgets that is cool to have, even if you never actually use it for anything but protecting your phone.

ReadyCase designers have put the case on crowd funding website Indiegogo. They’ve already surpassed their goal of $15,000 several times over, so the case should see production. Plans are to get it shipping by February of next year. You can fund the campaign and pre-order your case for as little as $40.