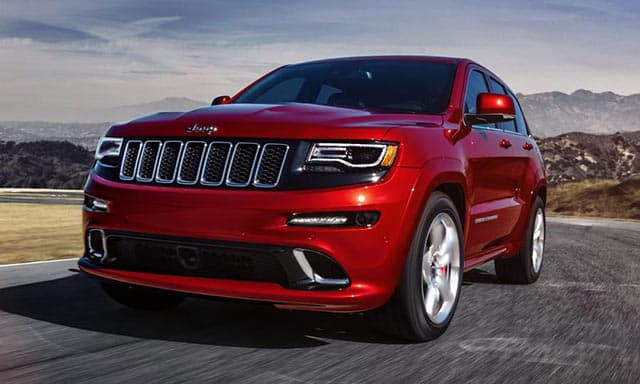 The Jeep Wrangler and Grand Cherokee are two of the surest means for traveling far off the grid for camping, boating, backcountry skiing and other adventures. If you’re looking to attack the dirt with a little more grunt, the Grand Cherokee SRT is the way to go. Jeep introduced the all-new 2014 GC SRT at the 2013 North American International Auto Show earlier this week. This upgraded Jeep packs a full horse farm of power and a mean, aggressive exterior that brags about it.

Like the current SRT8, the 2014 SRT gets a significant power boost courtesy of the massive 6.4-liter V-8 HEMI engine. That powerplant churns out 470 horsepower and 465 lb-ft of torque, ensuring that you have plenty of performance on tap. The driver is connected to that grumbling eight-cylinder by way of a new eight-speed automatic transmission engineered to optimize shift quality. For those that believe that man is still greater than machine, the transmission offers a manual mode that makes use of steering wheel-mounted paddle shifters.

A hulking, HEMI-powered Jeep may never be an EPA fuel economy leader, but new technology will help SRT drivers get a little more out of their pumped gas. A new Eco Mode, available at the push of a button, optimizes the transmission’s shift schedule and deactivates four cylinders when conditions allow. The result is a more fuel economical ride. Five other modes -Auto, Sport, Tow, Track, and Snow – fine-tune drive settings for different conditions.

Jeep hasn’t listed the performance figures for the 2014 Grand Cherokee SRT just yet, but a look at the 4.8-second 0-60 mph time of the 2013 SRT8 indicates it will continue to perform like a high-end sports car while allowing drivers the freedom to roam anywhere. Perhaps more important than speed or acceleration, the upgraded Jeep has an improved towing capacity of up to 7,200 pounds, so drivers can get all their toys where they need to go.

Outside, the SRT’s body has received some updates, including a burlier grille, new headlamps with LEDs, larger tail lamps and a redesigned liftgate spoiler. The liftgate itself is operated at the push of a button.

No matter how gritty the terrain outside, the SRT’s interior wraps occupants in luxury. The cabin has a Laguna leather interior and new 8.4-inch radio touchscreen. The touchscreen can be used to show 0-60 mph times and track times and can share those numbers with other SRT enthusiasts via 3G connection. The infotainment system also provides access to the services of Uconnect Access Via Mobile, which offers cloud-based features like Internet music, Bing searches and voice texting. A heated SRT steering wheel sits in front of a 7-inch color instrument panel display. Buyers can also opt for an available 825-watt 19-speaker premium Harman Kardon audio system.