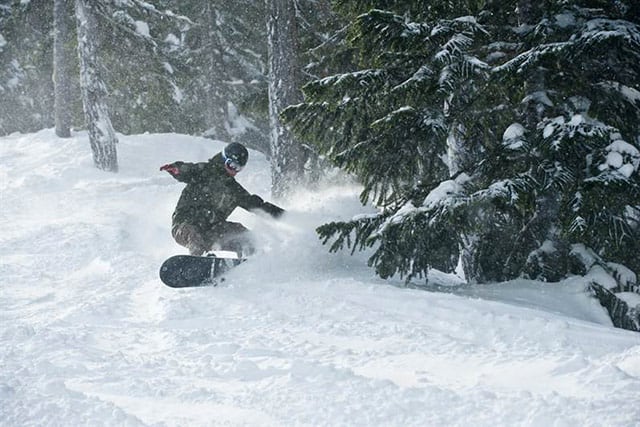 The best ski resort for snowboarding is the one you happen to be carving lines in on any given day. A day of snowboarding is 100 percent better than a day of sitting on your couch pondering or reading about the best resort.

Outside of that simple rule, however, there are a few resorts that excel beyond all others. Since riders differ as to their tastes, we’ve kept things loose, focusing on resorts that are good for freeriding, park and pipe, or both. While we’re a bit biased to our North American base, we’ve tried to cover all corners of the world, including the winter-in-summer Southern Hemisphere.

You’re unlikely to have a bad day at any of these worldly hot spots.

[youtube id=”dUjmBn94DW8″ width=”450″ height=”260″]
Two of the most challenging resorts in the US combined into one mega-playground last year. Squaw is famous for being the birthplace of American extreme skiing, and names like “Palisades” and “McConkey’s” bring tingles to the spines of ambitious freeriders. Riders will find a progressive 5-park system at Squaw and a recently upgraded mile-long terrain park at Alpine. One ticket gets you into both resorts. If you plan to do a lot of traveling this winter, be sure to check out the Mountain Collective Pass, which combines Squaw/Alpine with other world-class resorts like Jackson Hole and Aspen.

Find out more about Squaw Valley

[youtube id=”Z1A4gXbjuGI” width=”450″ height=”260″]Mainland Asia may not be known as a major ski/snowboard destination, but combine the world’s largest mountains, the growing wealth and power of countries like China, and the upcoming 2014 Sochi Olympics (Sochi is in Europe or Asia, depending who you ask, but Russia is definitely part of both), and you have the recipe for an up-and-coming ski destination. Gulmarg has been one of the first stars of this movement, and whispers and trip reports have been getting louder and more numerous. The resort is known for having the highest gondola in the world at 13,000 feet and for light, plentiful powder. When a destination is both off the radar and politically restless, you can bet you’ll find plenty of fresh tracks.

Find out more about Gulmarg

[youtube id=”royc0ORBlw” width=”450″ height=”260″]
Aspen may bring up images of fur-lined boots, champagne lunches and $700 Nordic sweaters, but it’s hard to deny that the ritzy ski destination is one of the most diverse and exciting in the United States. In fact, Transworld ranks it number one this year. While we don’t know that we’d go that high, Aspen’s four mountains do provide something for everyone. Hit Buttermilk or Snowmass for their superpipes and parks or Aspen Highlands for its steeps and terrain. Then mosey on into town for après and nightlife – they don’t call it Ass-pen for nothing.

Find out more about Aspen

[youtube id=”KUWoQMeyF1A” width=”450″ height=”260″]
Along with Park City Mountain Resort, Brighton is known as the place for snowboarders in Utah. Unlike PCMR, Brighton is hammered with 500 inches of UT blower each season, providing plenty of exhilaration for powder hounds. A top-to-bottom four-park terrain system and a Zaugg-cut pipe keep freestylers busy. And just in case you want to expand your horizons, the Sol-Bright pass lets you link up with neighboring Solitude, and Snowbird is just a canyon jump away. Brighton also offers 200 acres of night skiing.

Find out more about Brighton

[youtube id=”OGam2HK7d40″ width=”450″ height=”260″]
One of the only known places in the world that can compete with Utah in terms of sheer quantity of dry snow, Niseko, which consists of four interconnected resorts on Niseko Annupuri, was once ranked the second snowiest location in the world, beating out places like Alta and Aleyeska. The place gets BURIED with fluffy perfection. And from what we’ve heard, the locals aren’t as thorough when it comes to sniffing out every last stash.

Find out more about Niseko

[vimeo id=”48659336″ width=”450″ height=”260″]
The Marte lift at Las Leñas is considered to be one of the best in the world. The chair draws the rider into a rock-peppered cathedral of ski-mountaineering-style terrain that represents some of South America’s most legendary steeps and chutes. The greater resort also has backcountry access, a terrain park and night skiing. If skiing in the summer isn’t enough to get you there, don’t forget to take into account the scorching-hot locals and nightlife.

Find out more about Las Leñas

[vimeo id=”27962850″ width=”450″ height=”260″]
If you want big, imposing freeride terrain during the summer, you head to Las Leñas. If you want to focus on improving your park/pipe game, a trip to Snow Park gets it done. Snow Park is a resort dedicated to park terrain. Terrain includes a 120-foot Mega Booter, a triple jump line, and the Bag Jump for going big with a guaranteed soft landing. Of course, there are also boxes, rails, a superpipe, etc.

Find out more about Snow Park

[youtube id=”fw0WTFDgwFo” width=”450″ height=”260″]
Squaw Valley may be the birthplace of American extreme skiing, but Chamonix is the birthplace, period. This resort continues to be THE resort destination for skiers and riders looking to attack puckering terrain and push extreme skiing to new heights. Just take a look at what Xavier de Le Rue has put together over the past few years if you’re skeptical that it’s the place. Even if you’re not at the bleeding edge of freeriding, you’re certain to find something you enjoy among the spikey peaks at Chamonix Valley’s multitude of linked ski areas.

Find out more about Chamonix

[youtube id=”SHIptfovneg” width=”450″ height=”260″]
A bit south of Squawlpine and Lake Tahoe, Mammoth Mountain has long been one of the giants of snowboarding. Mammoth is truly huge in every way: 3,500 acres, 150 trails, 400 inches of snow and a season that doesn’t quit until summer. Throw in a huge park system with urban, progressive and jib-specific parks, 18- and 22- foot pipes, a boarder X course, and loads steep, invigorating terrain, and we don’t expect that Mammoth’s reputation for great snowboarding will be lost anytime soon.

Find out more about Mammoth Mountain

[youtube id=”Qju89WeBrEY” width=”450″ height=”260″]
Topping a best ski resort list with “Whistler Blackcomb” may be as original as topping a list of baseball greats with “Babe Ruth,” but it’s hard to argue that the resort doesn’t offer the biggest, most diverse snowboarding experience in the world. Whistler’s reputation is split straight down the middle: half big-mountain and half big-air. One of the true freestyle capitals, the resort has 99 acres of terrain parks with more than 200 features, not to mention two pipes and a snowcross course. In terms of mountain terrain, no other resort on the continent comes close: more than 8,000 acres, 16 bowls, 200 runs and a mile of vert. If you can’t stay inside those expansive boundaries, the surrounding backcountry is like exploring a Hollywood set designed for snowboard films.

Find out more about Whistler