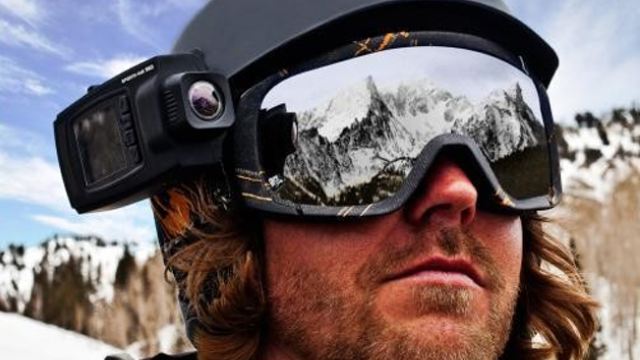 Since someone first got the idea to pair cheap, easy digital video with durable casing and versatile mounting options, a few names like “GoPro” and “Contour” have ruled the action cam market. Their empire is under attack from both sides of the spectrum, however. On one end, major electronics manufacturers like Sony and JVC are bringing action cams to market, and on the other, smaller manufacturers are offering packages that maximize bang for the buck.

Sports-Vue is in the latter category. The Salt Lake City-based manufacturer has been around for a few years, and while it doesn’t have the name recognition of a GoPro, it offers competitive packages that are affordable and robust.

One of Sports-Vue’s top cameras is the 360HD, a 1080p action camera with 180-degree swivel lens. The lens films 170 degrees of footage – the 180-degree label refers to the swivel mount that lets you easily rotate it for different types of mounting, similar to the rotating lens on Contour cameras. This gives you the versatility to mount the camera in all kinds of different ways without losing the ability to line up the right shot.

The 360HD also gives you an integrated color LCD screen for in-the-field playback. Its handheld remote gives you more control while pedaling, paddling, carving and doing what you do. Integrated waterproofing (up to 60 feet) means that you can splish, splash and scuba without worrying about an extra waterproof case. The camera is sold standard with several mounts, including a helmet mount, head strap, handlebar mount and goggle mount.

Given its generous spread of hardware, you might expect the Sports-Vue 360HD to retail for above, or at least at the same price, as competitors. However, it undercuts the ~ $300 of other 1080p cameras with a $265 retail price. Considering that it includes equipment (LCD screen, remote control, etc.) that you’d have to pay extra for on other cameras, that price is pretty solid.

On the opposite end of its line, Sports-Vue offers the Widget video camera, which it calls the “world’s smallest helmet cam.” At $55, it must be among the least expensive, too. The camera offers 720×480 filming, a simple two-button interface and three mounts. It isn’t the option for capturing epic footage to be screened in front of all your friends on your HD big screen, but it is a good fit for those that want a small, inexpensive camera for posting Web video of their latest exploits.

Sports-Vue products are backed by a one-year “You  break it, we replace it” guarantee, something that could prove valuable when you consider the trials and tribulations that any action cam goes through. The company promises hassle free, customer-centric processing of all repair/replacement issues. Note that the replacement guarantee includes a $35 processing fee paid for by the customer. Sports-Vue also offers a one-year warranty (extended two-year warranty on the 360HD) for manufacturer defects and will repair or replace defective equipment and accessories.