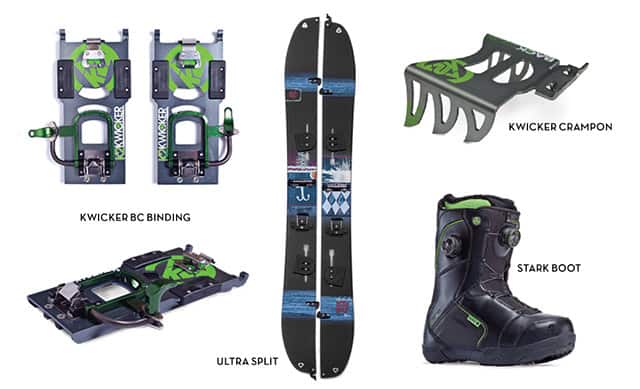 Over the past few years, skiers and snowboarders have migrated increasingly from resort slopes and parks to surrounding sidecountry and onward to deeper, more remote backcountry peaks and lines. While backcountry riding has opened up all kinds of new possibilities, it’s also increased the need for more purpose-built gear. K2 answers this need with the all-new Kwicker splitboard package, which promises to be the most user-friendly splitboarding solution on the market.

K2 calls the Kwicker package the quickest and lightest available and says that it makes big strides in three key areas: weight reduction, transition speed and overall user-friendly mechanics.  K2 claims that the set-up is as light as a traditional solid board set-up and easier to use than existing splitboards.

At the heart of the new package is an old, near-extinct technology: step-in bindings, specifically K2’s Clicker system. All the rage about 15 years ago for their ease of use, step-in bindings declined in popularity and essentially disappeared from the snowboarding scene because of inherent problems and a market preference for strap bindings. K2 believes that step-ins are officially ready for a revival, and that revival will come in the form of a split design.

“The weak point in the Clicker system was the boot,” K2’s global marketing manager Hunter Waldron explained to Transworld. “ Ten years ago we just didn’t have the technology to solve the highback and ankle strap replacement challenges.  But with the Endo construction and the Boa Conda internal heel hold, those problems are solved without bulky external parts that were bolted to the previous generation boots.  Also, fit technology has improved by leaps and bounds in ten years.  With better materials like Intuition foam liners, Boa precision lacing, and better last shaping our modern day fit makes a step in system possible again.”

The included boot’s Endo Construction uses an integrated urethane endoskeleton that serves as a sort of internal high back, solving the support issues related to step-in bindings. The Boa Condor, meanwhile, serves as an internal ankle strap.

The Kwicker BC Binding uses the evolved step-in system along with splitboard binding hardware from Voile to keep things light and easy to use. The system does not rely on pins and switches between uphill skinning mode and downhill shredding mode with quickness and ease.

K2 has been working on the Kwicker system for two years and is ready to show it to retailers and riders. It will have more information about it at the upcoming Outdoor Retailer Winter Market and SIA shows later in the month. It has yet to release pricing or availability information, but we assume Kwicker will be ready for next season. It will be sold as both a full board-boot-binding package and as separates. We’ll update you with more details when K2 releases them.