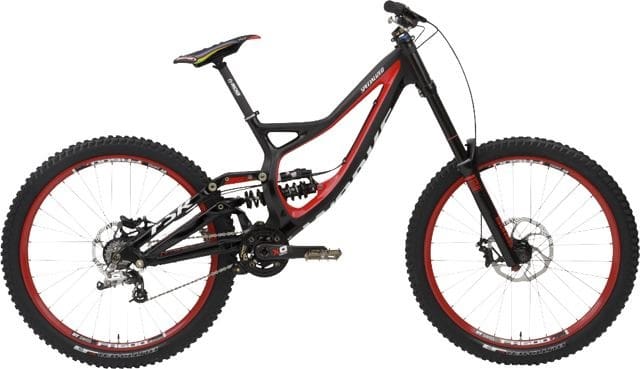 As news of the 2013 bikes continue to trickle in across the industry, many were wondering what Specialized would be doing with their Demo lineup of bikes for 2013. Last fall Sam Hill and Troy Brosnan were seen riding what looked like Carbon Fiber Specialized Demo bikes during World Championships in Champery, Switzerland. Troy Brosnan would go on to win his title in the Junior category aboard this new frame and his run would have placed him in second place in elite men which is no small feat.

Jumping right into it, Specialized has come a long way since the days of the first Demo 9 back in 2009 as you can see from just looking at the old model.

The Demo has come a long way from a burly freeride inspired bike to a race ready downhill bike that has become quite popular at bike parks and underneath many racers. Available in three sizes (S / M / L) and 200mm of rear wheel travel.

Lighter and stronger is always a good thing and that is what Specialized feels they’ve done here with the new Demo. The Demo utilizes their FACT carbon fiber layup technique but has new processes to improve it even further.

The FACT IS construction builds the front triangle in two separate pieces: BB and seat tube area and the top/head/down tube area. This allows the wall thickness and layup to be exactly what the rider requires in a given area. For example, the carbon is 4mm thick in the high-strike area of the down tube, while less thick (think lighter) in areas not likely to take hits. The head tube and BB area is also unique in that they have forged alloy sleeves mated to the carbon. This allows for a better connection to the headset, bearings and bottom bracket as we all know DH riders can get wild with these key parts. – Specialized

The Specialized full suspension bikes utilize the FSR technology and under the manipulation of Jason Chamberlain has a very unique ride when paired with its aggressive geometry.

The Team Replica S-Works that we’re discussing here is a bike that features a lot of things that downhill racers have been asking for a long time. Often racers reduce the gears in the rear cluster as few gears are typically needed. In addition to that Specailzied took things a step further and have teamed up with DT-Swiss to provide a custom rear 135mm wheel on the S-Works Replica that gives the racer not only a custom tight 7-speed gear cluster in the rear (9t cog), but also allows for use of a smaller 30-32t chainring up front given this smaller 9t cog in the rear. This gives more ground clearance without having a high bottom bracket for the rider. This is something every rider can appreciate when barreling through a rock garden or railing a turn.

A few things to note is that the axle unthreads from the drive side so removing the rear wheel isn’t as easy as it could be and some of the parts are specific like the rear wheel that aren’t common pieces that you can find just anywhere. Specialized and DT-Swiss however are behind it all so support shouldn’t be an issue. As a final point, industry trends have most new downhill bikes with an integrated fork bumper in the frame but this one does not.

Finishing out the build on the S-Works Replica setup is a setup that is ready for any World Cup racer. The S-Works Demo 8 is a limited bike at only 250 planned for production so if you’re after a top bike for 2012 this one will be hard to beat. Its low bottom bracket paired with the short rear chainstay yield for a fun and playful ride while still offering good stability on steep terrain and blasting through rough terrain. The carbon bike is beefed up nicely in the key areas where impacts typically occur and the compact drivetrain setup is something that racers have always want from a functional perspective but doesn’t work with other bikes due in part to suspension design. If you’re in the market for a new bike in 2013 and have some extra money to spend, the Replica Specialized Demo 8 is one that is hard not to consider.