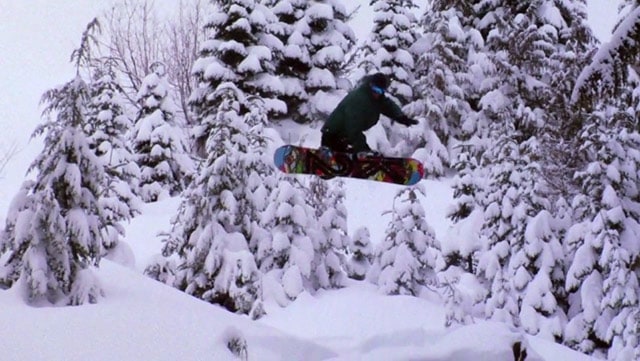 While it’s nothing like the world-renowned Whistler Blackcomb ski resort only a few hours’ drive to the north, Washington State’s Mount Baker and Mt. Baker Ski Area provide some of the best snowboarding in the Pacific Northwest – and without the crowds, craze, bells, whistles, and drama of its Canadian cousin. It’s a terrific place to spend a day, a week, a month, or even the whole season without worrying about anything but the snow.

The Mt Baker Ski (and Snowboard, damn it) Area is best known for the many world records that it holds. The most well-known and relevant to snowboarders is that it holds the record for the world’s greatest recorded snowfall in a single season with 1,140 inches. Though the record breaking snowfall happened a few years back in the 1998-99 season, Mount Baker also holds the record for the highest annual snowfall of any ski area in the world with 641 inches per year. Specifics aside, when you head to Baker, there is going to be snow, and a lot of it.

If you’re a student of snowboarding, then you’ll probably feel like you’ve already met Mount Baker the first time that you head there. Because of its picturesque setting among other Cascade Mountains, its aforementioned snowfall, and its startling variety of advanced terrain including exemplary backcountry spots, the Mt Baker Ski Area has been featured in too many snowboarding films to name here. Seriously though, if you watch all of the latest and greatest snowboarding films, you’ve seen Mount Baker featured more than once.

The lifts at Baker are much like the lifts anywhere else except that they’re solely referred to by numbers instead of name or destination. Because of this, it’s always a good idea for first-time visitors to study up on a lift map before heading out for a day at the mountain. There are eight lifts in total and also two handle-tow lifts for beginners and children.

Though only eight lifts are available at Mount Baker, the variety of runs is extensive. Each one gives you something a little different in terms of powder and terrain. There are quick and speedy runs that are perfect to bomb such as Austin, North Face, Chicken Ridge, and the well-known Chute. There are a number of expert runs where your years of experience will really come in handy as you navigate a maze of trees, rock launches, and pillows. Mount Baker even has its own freestyle park, Pinky Park. It’s small but fun to mess around on and incorporates a number of jumps, rails, and boxes into a few easy-to-ride lines.

If the snow on the main runs is a little choppier and more overridden than you prefer (and Baker does get busy on powder days), then the mountain’s backcountry is where you’ll feel most at home. Though it is extraordinarily accessible, relatively few people attempt to venture out to ride it. The Elbow backcountry area is by far the most popular and is near the actual ski area itself. Riders who want to experience true backcountry can jump across Baker’s boundaries at pretty much any point on the mountain.

Mt Baker Ski Area is truly progressive as far as the backcountry goes. The point mentioned above – that you can leave the ski area for the backcountry pretty much anywhere – illustrates this. However, if you are planning on finding some hidden powder, it’s worth reviewing their backcountry policies. You must carry an avalanche shovel and transceiver at all times (you should anyway) and always be with a riding partner. You must also show that you know how to work your transceiver and that you’re knowledgeable about the latest snow and avalanche conditions. It’s a small price to pay for the gorgeous snow, steep rolls, and tasty cliffs that you’ll soon encounter.

Mount Baker is also home to its fair share of snowboarding contests throughout the year. The most famous of which is the Legendary Banked Slalom. It’s been held since 1985 and is largely considered the original boardercross event. Several big names in the snowboarding world have won the contest including Nate Holland and Terje Håkonsen.

When your thighs are shot and you just can’t stand another second on your board without collapsing, Baker offers a pretty fun bar called the Tap Room that is located in their Heather Meadows Day Lodge. It’s the only place to grab a drink on the mountain but that makes it all the cozier. Plus, they have a great selection of beers. There is also a great little bar about 30 minutes away in the nearby town of Glacier. They’re famous for their killer fish tacos and are an easy stop for on your way back to town.

In addition to its world-class riding, Mount Baker is also known as a haven for snow bums. Simply put, it doesn’t feel much like a resort as it does a cool place to hang out and ride with your friends. This is largely because they lack many of the amenities of most ski resorts – they don’t have any corporate sponsors, ATMs, and provide very little actual lodging. They even are lenient with out-of-town visitors camping out in their cars in the parking lots overnight. Simply put, Mount Baker is one of the best mountains in the world and should be on the bucket list of any and every snow lover.