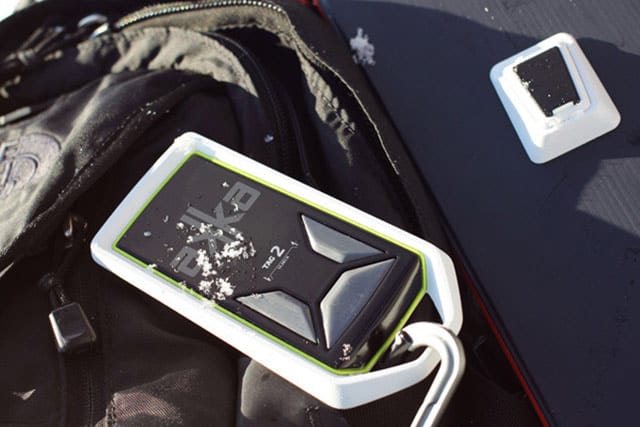 If you’re a dedicated powder fiend, neither cold, nor wind, nor minor injury, nor work will keep you from getting a powder-morning fix. There’s one thing that can stop you, however: losing your skis. While this may or may not be a problem you’ve ever experienced, it’s one you don’t want to face. Few things about skiing could be as disturbing as the image of friends, acquaintances, gapers and foes lapping you and carving scars across your virgin snow while you dig frantically for your skis – that’s no way to spend a powder day.

Because of this problem – or at least the potential for it – Pacific Northwest-raised powder hound Anthony Kolb designed a solution. The Ski Retriever is almost like an avalanche beacon for your skis. A homing tag attaches to each ski and a handheld receiver helps you track them down if they get buried in snow. Kolb released his Ski Retriever at last year’s SIA show and is trying to raise funding for an updated version.

The latest version of the Ski Retriever, now called the AKKA Ski Retriever, uses an OLED screen that works in conjunction with audio cues to indicate the distance and direction to your skis. So instead of shoveling around with your hands, you can pinpoint your skis with ease and get back on your way.

If you’ve never lost your skis in the snow, you may have trouble understanding why you’d need a device like this. The idea that inspired the design is that skiers can get separated from their skis on a fall. On particularly deep days, those skis can get buried without a trace. The Ski Retriever makes them easier to find.

Snowboarders don’t have to worry about losing their board on a fall, thanks to strap bindings, but the system can easily be used on a board if you have a history of losing track of your ride during particularly hard, mind-clearing après sessions. It can also be used with other easily lost devices, including action cams and poles.

Given that the AKKA Ski Retriever has barely made a dent on its $100,000 Kickstarter goal (about $2,500 with 24 days left, as of publishing), we’re guessing Kolb is going to have to find funding elsewhere. If he’s able to secure that funding, he mentions exploring alternative uses like anti-theft security and avalanche search.

Those that want to be early adopters of the AKKA Ski Retriever can pre-order on Kickstarter for $125. The price includes the receiver and two homing tags and represents a significant discount on the expected retail price of $199 +. Plans are to get those pre-orders shipped by next fall, but judging by the slow fundraising start, that date may very well get pushed back.

The original Ski Retriever, which is a slightly less evolved design based on the same concept, is currently available on the company’s website. The listed retail price is $160. Extra tags are also available, and each Ski Retriever has the ability to pair with up to four tags.