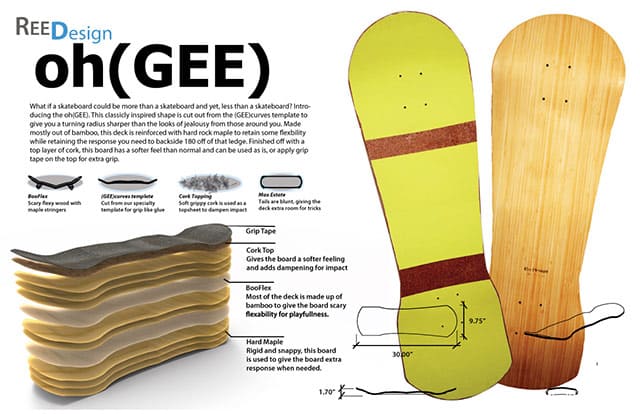 While there are certainly exceptions, the most basic skateboard formula has long been the most dominant. The seven-ply maple deck covered in grip tape bolted to wheeled trucks is pretty much the industry standard. While it’s lightweight, rugged and high-flying, not everyone believes that it’s the best possible solution. Reedesign is a start-up obsessed with rethinking skateboard design for the future.

Unlike the basic formula of skateboards, snowboards have followed a more creative path. Pretty much since inception, they’ve varied widely from brand to brand, style to style, using all kinds of different materials, construction techniques, flex patterns and shapes to deliver very specific ride characteristics.

In recent years, snowboard design has gotten even more diverse. After years of dominance, camber boards, in which the base is slightly concave, have been all but replaced by rocker and rocker-camber hybrids, which use a banana-like convex shape (or mix of concave/convex) for better float and play. Several manufacturers like Burton and Venture have even dedicated facilities to experimenting with more extreme ideas, paving the way for even more diversity in the future.

Northern Michigan University design student, Reedesign, LLC founder and skateboard enthusiast Adam Reed (see what he did there) has had his eye on the snowboard industry. As a senior thesis project, he decided to see what happens when you apply a little bit of snowboard-style freethinking toward building new types of skate decks. Reed pulled some inspiration from rocker-camber snowboard design and added a series of wavy curves to his boards. The resulting design has what amount to foot wells that Reed says keep the board suctioned to your feet, both on the ground and in the air.

Feeling good about his developments thus far, Reed plans to start experimenting with skateboard composition. Instead of the standard maple veneers, he has an ingredients list more similar to a snowboard – carbon fiber, bamboo, Kevlar and aluminum are all checked off. He’ll tinker with different recipes toward developing boards that are durable, playful and optimized for different skating styles. Like snowboards, Reedesign boards will have different amounts of flex dialed in for different disciplines. Reed could presumably create formulas for vert boards, park boards, cruising boards, etc., similar to the way that the snowboard industry offers freeride, park/pipe and other genre-specific models.With a winter graduation nearing, Reed has made a sobering realization: All the machinery and equipment he’s come to take for granted at NMU is soon to be inaccessible.

Rather than be discouraged, Reed turned to Kickstarter earlier this year for help in continuing the Reedesign project. He raised $4,000 in a successful campaign and has begun outfitting his garage with a hydraulic press, moulds and other tools necessary to flesh out his ideas.For now, Reedesign sounds more like a project of passion than a full-on start-up company, but Reed told us he anticipates it blowing up into a full-fledged company, especially now that he has some start-up funding and momentum. Should Reed stumble upon the perfect skateboard formula(s), we definitely expect to see his designs in skate shops around the country.