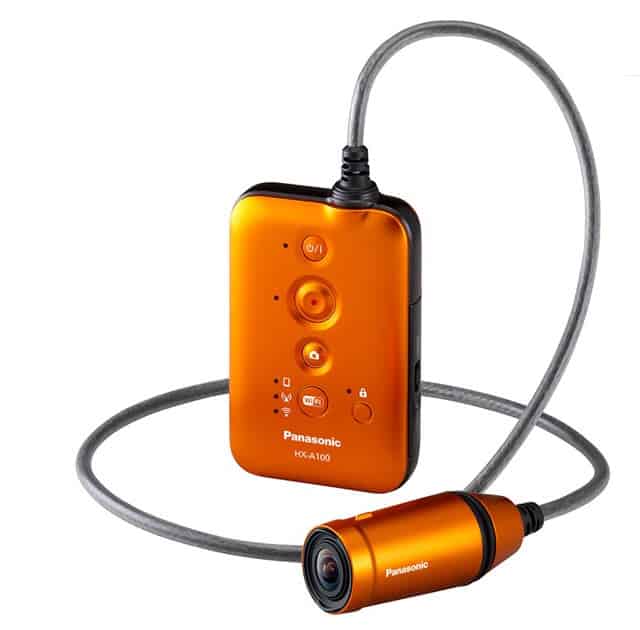 First JVC, then Sony, and now Panasonic … the action cam market is officially the new grounds for competition in the electronics market. At the Consumer Electronics Show last week, Panasonic unveiled its all-new HX-A100 wearable action camera. While the manufacturer battle will come down to footage, function and price, the camera does appear to offer some advantages over competitors.

Unlike the more common integrated designs used by GoPro, Contour and others, Panasonic splits the guts and the lens up into two components. This keeps the wearable part small and lightweight while allowing you to store the bulk comfortably in a pocket or backpack.

At first look, the camera is most similar to the pricey VIO POV.HD, but unlike that model, it doesn’t include a built-in LCD screen. Instead, it relies on Wi-Fi to let the filmer broadcast live streaming video via Ustream or view files on a smartphone or tablet. The separate rectangular component houses the controls and battery. It’s connected to the lens by a hard cable.

While the idea of a lightweight lens unit is definitely appealing, Panasonic’s design isn’t without its own issues. That cable looks awfully easy to rip out, and we could see that happening during the trials of action sports filming.

In addition to the typical gear and helmet mounts, the HX-A100 comes with what Panasonic calls an Earhook. Similar to a Bluetooth headset, the camera can attach to your ear for easy mounting even when you’re not wearing a helmet. It is also available with a multi-mount for securing it to a helmet or backpack.
In terms of optics, the HX-A100 has a mix of bright F2.5 lens, BSI Sensor, and Advanced Image Processing LSI. Panasonic says that it works well in both bright and low-light conditions. The camera helps to minimize filming mistakes with image stabilization and a Level Shot function that rights tilted images. It shoots in 1920 x 1080/60 fps, 1280 x 720/120 fps, 640 x 360/240 fps. The battery offers over two hours of high-definition filming with the Wi-Fi turned off.
Out in the field, you can dunk your HX-A100 in up to 5 feet of water for 30 minutes and rely on the dustproof design in gritty, windy environments. The Wind Noise Cut feature cuts out excessive noise when it’s blowing and gusting.

The HX-A100 retails for $299.99 – the same as the mid-range GoPro Hero3 Silver Edition – and will start shipping in March, just in time to catch some late-season ski footage.

It’s nice to see major electronics manufacturers entering the action cam market, but so far their offerings have failed to really impress. While JVC, Sony and Panasonic has each offered some kind of a feature to set its camera apart, none of them look to be hands and shoulders above traditional offerings from GoPro, Contour and the like. We would have hoped the companies would have used their extensive resource base and expertise to markedly improve what’s available. So far, they seem content to just compete on the same playing field.