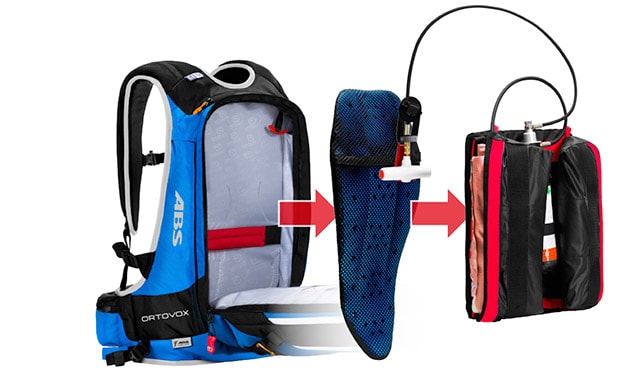 For the 2013 winter sport show circuit, Ortovox introduced a new avalanche airbag system designed for increased flexibility. The Modular Airbag Safety System (that’s M.A.S.S. from here on out) leverages ABS TwinBag technology in a system that easily removes from one backpack and installs in another.

A few years ago, you’d have had to search to find an avalanche airbag – or anyone using one – in North America. Now, it seems every major backpack and backcountry ski safety manufacturer has one, if not a few…Bergans, Dakine, Mammut, The North Face, and on and on. Ortovox feels its pack is special, and industry folks seem to agree, rewarding the German outfit with an ISPO Award for the M.A.S.S. design.

The packaged TwinBag ABS system can be pulled out of the backpack with ease and reinstalled in any one of five compatible Ortovox bags. The airbag unit can also be pulled out altogether on stable days and left at home, shedding 4 pounds of weight and opening up extra room inside the pack. Ortovox says that the system can be installed in as little as three minutes. The Trigger activation mechanism can be placed in either right- or left-handed position and adjusted to the rider.

M.A.S.S. will give backcountry skiers and riders more flexibility in buying and using packs that fit their individual missions, rather than being tied down to a single pack simply because it’s the only one that has an ABS system. Ortovox has three sizes of pack (24- and 26-liter men’s versions, and a 24-liter women’s) in the Free Rider series, aimed at lift-served slackcountry and light tours, and two (32 and 30 W) in the Tour Series, designed for deeper, earn-your-turn skinning and splitting. This way, you can ride a smaller pack for lighter trips and easily swap the ABS to a bigger pack when planning a more ambitious outing. Then use the packs for summer and other non-avalanche activities without the system at all.

All M.A.S.S. packs include the X-Skifix Ski Fastening System, which uses aluminum clasps to mount skis, snowboards and snowshoes. It offers diagonal and crossed mounting options.