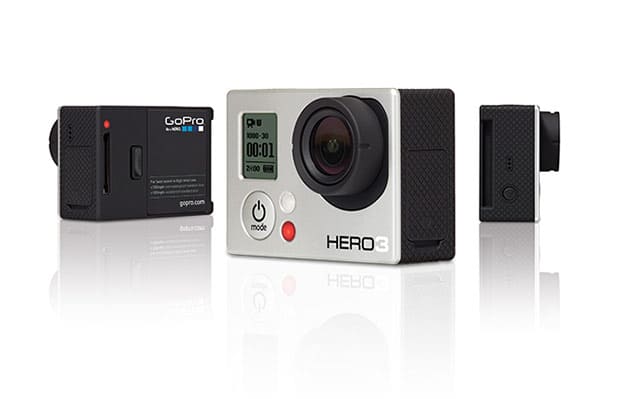 It’s that time of year, again: GoPro is updating the camera that defines action footage. The HD Hero 3 is more than just an evolutionary update; it’s an entirely new beast that takes GoPro beyond 1080p and adds new hardware while cutting bulk.

In August, Sony announced the market’s first 4K television, which offers a resolution of 3,840 x 2,160 pixels – 4 times the resolution of the 1080p sets that have long been the standard for high definition viewing. With a price of $25,000, it’s unlikely that many people will be shoehorning one of these 84-inch monsters into their living rooms in the near future.

The lack of 4K viewing hardware isn’t stopping GoPro from selling a camera with 4K filming capability. 1080p, while much more practical for today’s TVs, has just become so passé – every action cam has it, and no one’s impressed by it anymore.

To get people talking, GoPro needed to do something bigger with its newest hardware, and that something is 4K (15 fps). The flagship HD Hero 3 Black Edition has that next-generation resolution, so you’ll enjoy the crispest, most eye-poppingist footage of all your sports action just the minute that 4K TVs become accessible enough to bring home. It also shoots 1440p (48 frames per second) and 2.7Kp (30 fps).

While it offers higher resolution than the HD Hero 2, the HD Hero 3 comes in a package that’s about 30 percent the size. GoPro compares it to a small box (not book) of matches and says it weighs 2.6 ounces. The camera also has Wi-Fi capabilities built in, unlike the Hero 2, which required an add-on Wi-Fi Bac Pac. The Wi-Fi capability allows the camera to pair with a smartphone and/or GoPro’s Wi-Fi Remote for remote control and view finding. Like past GoPro models, the GoPro HD Hero 3 is waterproof to 197 feet with the included case.

GoPro has essentially corralled all of its cameras under the HD Hero 3 nameplate, rather than continuing to sell HD Hero and HD Hero 2 models. The White Edition uses the same 5-MP sensor and retails for the same $200 as the original HD Hero it replaces. The 11-MP Silver Edition replaces the HD Hero 2 at a price point of $300. Since not everyone really needs 4K resolution at the moment, the White and Silver Editions max out at good, old 1080p.

GoPro is currently offering the HD Hero 3 models for pre-order and expects to begin deliveries on November 14. It will also be getting the cameras out to retailers and plans to release the accompanying smartphone app for the White and Silver editions by November and for the Black Edition by the end of the year.

Key Specs of the GoPro Hero 3