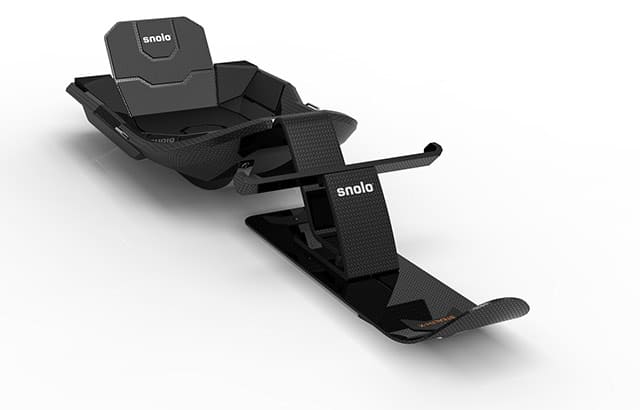 The Snolo Stealth-X sled is so advanced (and expensive) that its designers probably should have thought of a new category for it. Because it sure doesn’t belong on store shelves next to cheap plastic saucers and wooden toboggans.

Snolo spent six years researching the market and developing the design. What they came up with is a contour-molded carbon fiber shell with a front carbon fiber ski. The rider sits inside the carbon tub, puts his feet on the foot pegs and takes off like Clark Griswold. The manufacturer says it carves and stops much like a snowboard, once you learn how to move your body and feet. Snolo also says the Stealth-X isn’t picky about snow, performing smoothly in powder and hard pack alike. It is capable of speeds over 40 mph, plenty fast to send tremors through the nerves of many adults, including seasoned skiers and snowboarders.

Unlike those pull-along sleds gracing snowy golf courses, the Stealth-X is designed to tackle more serious terrain. The front ski comes off and stores in the shell, and the seat back folds down. The safety harness inside doubles as a set of shoulder straps, transforming the Stealth-X into a backpack for uphill travel. It weighs about 9 pounds. We can’t imagine taking it down any tight Chamonix couloirs or sharp Alaskan spines, but its mobility coupled with its high-tech design should allow it to function on gentler backcountry pitches.

While everything about the Snolo sounds like it has the potential to take sledding to new heights, everything about it also sounds expensive. If that’s what you’re thinking, you’re correct. Sticker shock takes on a new meaning when looking at the Snolo’s $2,999 price tag. A fast, lightweight, maneuverable sled sounds like fun, but $3,000 buys a lot of fast, lightweight, maneuverable snowboards and/or skis. Hell, you could buy a used snowmobile or heli-skiing package for that kind of money.

Until the price drops, Stealth-Xing (Xing?) is looking like an ultra-niche activity limited to the rich and bored. We could see the sleds showing up at après ski parties in Aspen and Gstaad, but can’t imagine the duct-taped, bell-hopping ski-town masses taking Xing up just yet.

On the upside, Snolo does plan to get a cheaper, non-carbon version to market in the future. But there’s an awful lot of empty space between $3,000 and the ceiling price that most sane people are likely to spend on a sled. If they can get the price down to a hundred or two, they might just get throngs of adults on sleds. If not, sledding will probably remain a child’s play.