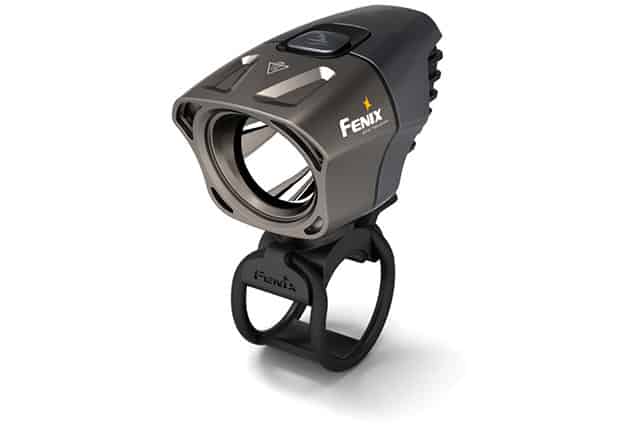 Bikers and light geeks have long been hacking Fenix flashlights into handlebar-mounted bike lights. Fenix recently decided it time to take over the reins and build a bike light of its own. The all-new BT20 bike lamp is a powerful torch that can serve both on and off road. The light has four separate lighting modes and a flash mode. The highest setting floods the ground ahead with 750 lumens for up to about three hours. Lower settings include 450 lumens (4 hours), 300 lumens (6.5 hours) and 100 lumens (21 hours).

The BT20 uses what Fenix calls a “pioneering dual distance beam system.” A refracting action in the lens creates a sort of split near- and far-sighted beam. You get a beam in the distance lighting up your future and a second concentration of light on the area right in front of your tire. It’s the closer beam that Fenix says separates its light from competitors. We’d imagine that the beam should keep you more in tune with any and all immediate terrain changes and obstacles while still keeping you attuned to what’s farther ahead. The BT20’s broad flood beam pattern also provides plenty of peripheral lighting.

The BT20 secures to handlebars between 20 and 35mm with a simple O-ring mount. The light head swivels from side to side, allowing for quick, in-field adjustment. While Fenix hasn’t released the full spec sheet, the light and accompanying battery pack look small and low profile enough to ride comfortably on handlebars or helmet. Fenix claims the design is aerodynamic and quick at dissipating heat.

The BT20 is powered by two 18650 rechargeable lithium-ion batteries that will take around two hours to charge. Alternatively, users can pop in four CR123A lithium batteries to keep the light burning.

Perhaps the most intriguing part of the BT20 is that Fenix intends to keep pricing below $100. That price is competitive with some of the cheapest systems on the market today, and the Fenix name brings promise of satisfaction-backed engineering that will perform and last. Some of the other companies offering competitive systems don’t offer the same level of brand-backed customer service that we assume BT20 owners will enjoy.

Fenix has shown the BT20 at recent trade shows like Outdoor Retailer and Interbike, but it’s still working on the prototype, so the light isn’t quite ready for market yet. If you simply can’t wait to see if the dual distance beam is all that Fenix claims, you can sign up for prototype testing. Fenix will send sample prototype units to selected testers for review and feedback. Get the latest light hardware a little early by turning play into work. You can get more information about that program on Fenix’s website.

Fenix hasn’t listed a specific release date, but it does say that it plans to launch the BT20 soon. We assume it should be on the market by next year.