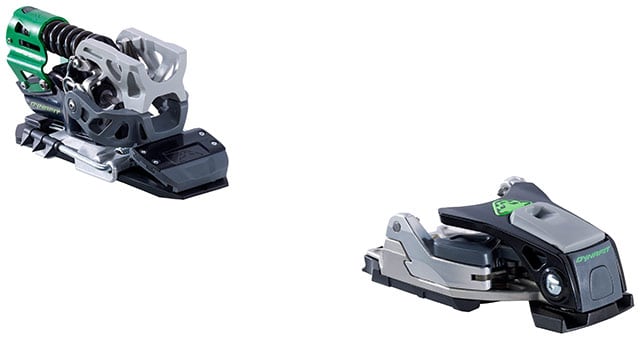 We look at a lot of awesome products here at Much Awesome but Dynafit’s Beast Bindings (DIN 16) are in a league all of their own. If you have one thousand bucks to dish out on a pair of ski bindings, it would be preposterous not to spend it on this pair.

Described by Dynafit as the lightest freeride touring bindings on the planet, the Beast ski bindings don’t really look the part. Rather their looks are more in-line with their name. The best bindings are, well, beastly, but I guess lightweight truly is what you get when you’re building something out of top-of-the-line $1,000 materials.

The Dynafit Beast Bindings are aimed at skiers who like to launch off stuff, bomb hills, and get wild. Like most other alpine bindings, the Beast’s toe piece rotates slightly affording you a bit of relief after a high-intensity vertical impact but without releasing you. It offers only the very best in the way of vertical elasticity and energy absorption.

But let’s get back to weight for a second. Since these babies are designed for the ultimate extreme of freeriding terrain, they are, like I mentioned above, a little beefier than normal and weigh in at four pounds per pair. That might not sound lightweight if you don’t regularly huck yourself off backcountry cliffs, but when you need a binding that stands up to the brunt of a full-on skiing attack, it definitely is.

The only problem with Dynafit’s Beast Bindings is also in their weight. They’re perfect for going downhill but problems arise when you try to ski uphill. Because of their reasonable weight, they tire out your legs quite quickly with each and every step.

Though the Dynafit Beast Bindings have some room for improvement, they are currently one of the best alpine touring bindings in the world. They’re super complex and have a lot of moving parts but are as durable and tough as they come.

The $1,000 price tag might be a hard sell for the average skier, but expert skiers (and wealthy skiers) will be hard-pressed to find more bang for their buck. And with only a limited release of 2,500 pairs, Dynafit already considers the Beast to be the Ferrari of its product line.

Keep your eyes on the Dynafit website for the Beast’s release in 2013.