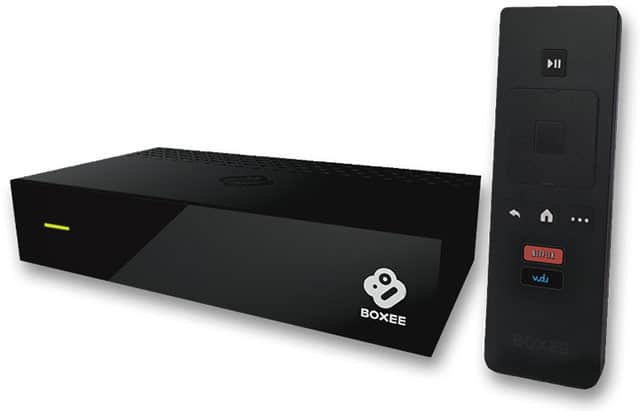 Cable and satellite continue to drain hundreds, if not thousands, of dollars out of our pockets every year. Yet there are still days where you can’t find a single thing to watch. With so many ways of getting on-demand content, cable may soon be obsolete – especially if more set-tops like the all-new Boxee TV start hitting the market.

Boxee TV makes cutting the cable and ripping out the dish more compelling than ever.

For less than 100 bucks, the box gives you Web streaming, unlimited DVR storage capabilities and two built-in TV tuners. In short, you can combine live television, Internet programming and recorded content, giving you a vast variety of things to watch from one sleek box.

What most makes the Boxee stand out from other boxes is its TV tuners. The tuners allow you to watch live over-the-air television on free networks like FOX, NBC and CBS, where ATSC broadcasts are available. They can also show unencrypted channels from your cable subscription, so you can potentially have access to some basic cable channels (you’ll have to call your cable provider to find out what, if any, channels are unencrypted). So unlike with other set-top boxes, you can use Boxee TV to keep up with your favorite network TV shows, in addition to viewing Web-based content. It comes with its own antenna to provide reception and also works with other antennas.

Another intriguing new feature of Boxee TV is its unlimited DVR functionality. You can use the available DVR to record an unlimited amount of programming in the cloud. The second TV tuner means you can record two shows at once or watch one show while recording another. Because your programming is stored in the cloud, you can watch it on your tablet or smartphone, as well as your Boxee TV.

The DVR function isn’t free and it’s only available in a limited number of metropolitan areas for now. Boxee is starting the service at $9.99 a month, but the slashed-through $14.99 a month on its website tells us that price will probably go up when Boxee TV gets rolling. Unfortunately, Boxee doesn’t have any built-in hard storage, so you won’t be able to store content on the box itself. You can find out more about the DVR launch regions on Boxee’s website.

The Boxee TV costs $99 and is available for order on Boxee’s site now, right in time for your holiday shopping (even if that holiday shopping is for you). Wal-Mart is also selling the device at its stores. The price is competitive with other set-top boxes, and based on all the features it offers, we think the Boxee TV could be the best choice out there.