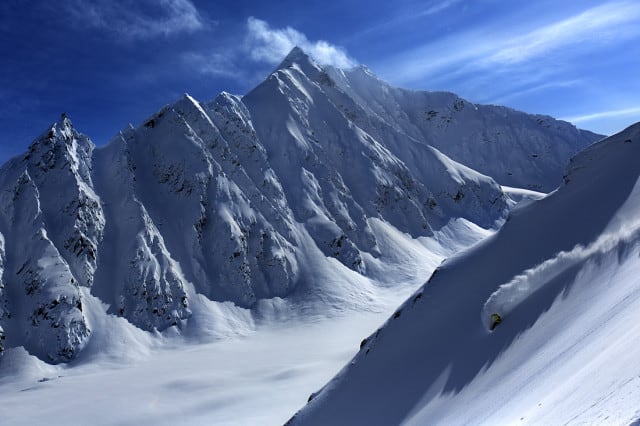 Each year dozens of new snowboards are released by companies both large and small. In addition, many older boards, that have been around the block once or twice, are newly updated and tweaked.

2013/2014 is no different and the snowboard offerings look better than ever before.

The offering of 2014 all-mountain snowboards are particularly hefty. There are just so many great boards out there that it can be difficult to choose between them. Luckily, most of these boards share many of the same characteristics – directional shape, slightly stiffer flex, a camber or hybrid-camber profile – so its up to you to focus on the special features when selecting a new stick.

We’ve taken some of the guesswork out of the process by ranking our top 5 favorite 2014 all-mountain snowboards. Though they’re all slightly different, and work best for different styles of riders, any of these boards will make the new season on the mountain as fun as it can get. Each and every one of these boards absolutely rips.

Here are the best 2014 all-mountain snowboards in no particular order:

Whenever you’re riding a Burton snowboard, you know that you have one solid and high-performance deck underneath your feet.

The 2014 Burton Trick Pony Snowboard is as playful as all-mountain boards come. And it ain’t no one trick pony. It knows all the tricks. Its twin shape (and twin flex) and flat camber profile make riding it a blast. It has a consistent and intuitive underfoot feel, loads of pop, and solid edge hold. Take it up to the backcountry and its elongated tip will help you float over fresh pow.

Find out more about the 2014 Burton Trick Pony Snowboard.

Experienced riders will benefit from the aggressive design of the 2014 GNU Billy Goat Snowboard.

It’s all-mountain construction features a camber dominant profile and a twin shape. The slight rocker between the bindings gives the snowboard more pop, power, precision, and control than you’ll know what to do with. The slightly setback stance allows you to take this board past the tape and really rip.

Find out more about the 2014 GNU Billy Goat Snowboard and check out our in-depth preview.

An incredibly durable snowboard that feels at home anywhere on the mountain, there is no denying that the 2014 Rome Mod Rocker Snowboard is as good an all-mountain board as any.

The Mod Rocker starts with a twin shape and a regular camber but flattens things out and extends this flat profile past the inserts. Furthermore, the board’s tips are rockered for an aggressive feel. A variable sidecut gives the deck a more forgiving feel no matter the terrain. Finally, a blend of five lightweight woods plus carbon barrels in the tip and tail make the Mod Rocker a badass board for a badass rider.

Find out more about the 2014 Rome Mod Rocker Snowboard.

The 2014 K2 Raygun Snowboard is a very simple and straightforward deck. Yet this simplicity is what makes it shine so brightly.

Nothing fancy gets in the way of the Raygun’s performance. Its slightly directional shape, flat profile between the bindings, and slight rocker in the tip and tail create stability throughout while still giving it a light, playful, and floaty feel. Hyper Progressive sidecut ensures proper edge hold and keeps your riding straight and true. It’s a perfect 2014 all-mountain snowboard for anything from backcountry bombing to park freestyle.

Find out more about the 2014 K2 Raygun Snowboard.

With our favorite name of any on this list, the 2014 Capita Defenders of Awesome Snowboard gets the all-mountain job done and is more than a sick graphic of a bunch of hotties with guns.

The snowboard features a regular camber profile that cuts out past the inserts where it flattens out slightly and reverses into the tip and tail. Response and snap are prevalent without sacrificing anything in the way of stability or an easy ride. Its directional twin shape makes it perfect for the park, the pow, or anywhere else on the mountain.

Find out more about the 2014 Capita Defenders of Awesome Snowboard.