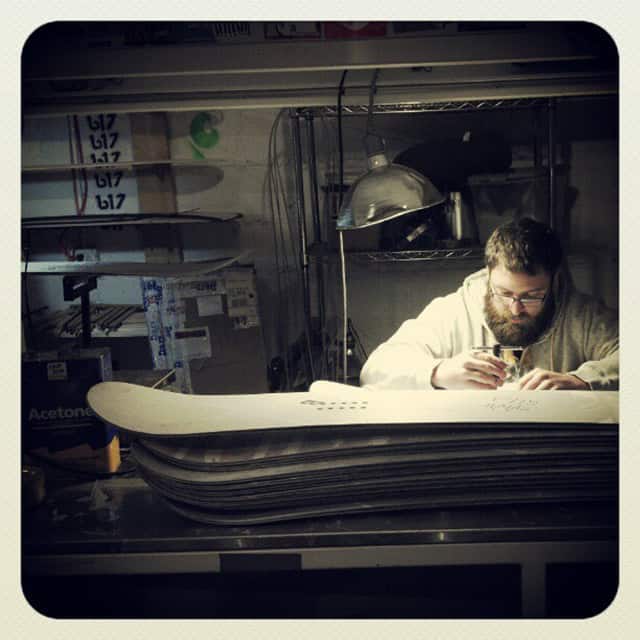 Though you probably haven’t heard of them unless you’re an out-of-this-world snowboard nerd or from the New England area of the United States, Bean Snowboards is one of the coolest snowboarding companies around. Their high-quality snowboards are made in the Boston area with locally-sourced materials and incorporate a hefty dose of that Do-It-Yourself spirit that is so often lacking in the snowboarding world of today.

Sticking to their DIY roots, Bean Snowboards has recently utilized Kickstarter, a funding platform for creative projects, to raise some much-needed money for their Boston Artist Series of boards. Basically, their artist series gives local artists a chance to design a line of snowboards that Bean then produces in Boston. The boards all have a limited run so grabbing one is an easy way to have a completely unique board while supporting a local artist and a local business.

Bean’s goal for their Artist Series project is to raise a minimum of $17,000 by December 20th. If you aren’t familiar with Kickstarter, they run an all or nothing operation. So, if a project doesn’t receive the minimum amount of funding, then the project doesn’t receive any of the money and it goes back to all of the people who donated. This makes it a lower-risk operation for both the people doing the fundraising and the people donating their money. It helps motivate the project owners to round up funding by the deadline.

Even cooler is the fact that you don’t have to donate much at all. In fact, $1 is the minimum donation for Bean’s project. If you have a little extra money floating around or you’d really like to help out a local company, then you can donate up to $2,000 to the project. Little gifts act as some incentive for donating, so, for instance, if you donate $25 to the Bean project, you’ll get a special-edition Bean snapback hat. $400 gets you the artist series snowboard of your choice and a bag of knick-knacks. No matter how much you donate, you’ll receive that warm and fuzzy feeling that comes from helping out a totally awesome snowboarding company do something that is, well, much awesome.