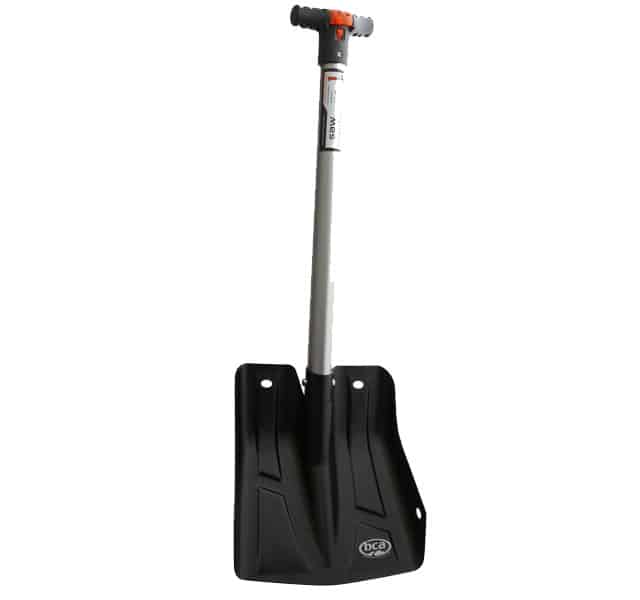 A quality snow shovel is absolutely essential if you plan to cross the orange ropes and hoof it up into the pristine powder of the backcountry. A sturdy snow/wood saw is also a handy addition to your backcountry kit. Combine the two together and you have the Backcountry Access Arsenal Shovel w/ Saw, a high-quality, durable, and lightweight shovel and saw combination that is specifically tailored to the needs of the backcountry skier or snowboarder.

A standard snow shovel just won’t do any good when snowboarding in the backcountry. For one thing, they’re bulky and heavy. The weight of your board and other equipment is more than enough to carry up and then down the mountain. This is where the Backcountry Access Arsenal Shovel comes in. It weighs in at a featherweight 27 ounces and collapses down to 27.5 inches. While it’s not so small that you won’t notice that it is there, it is one of the nimblest snowboarding shovels on the market. Plus, for such a small shovel, it has a huge 9 inch by 10 inch blade.

Now, let’s get to the saw piece of the Backcountry Access Arsenal puzzle. It is built into the handle of the shovel so that you don’t have to worry about carrying two separate tools. It also alleviates any fear of getting cut with the blade since it is tucked away in the shovel handle’s metal casing. Unlike many other shovel/saw combos around, you’re actually able to use the saw and shovel independently of each other, meaning that the shovel still works even when you’re using the saw. This is good news if you’re ever in a situation that requires the use of both.

Pick up this Backcountry shovel even if you only venture into the backcountry every now and then. It’s best to never go unprepared when you are facing snow that is otherwise untouched by humans.