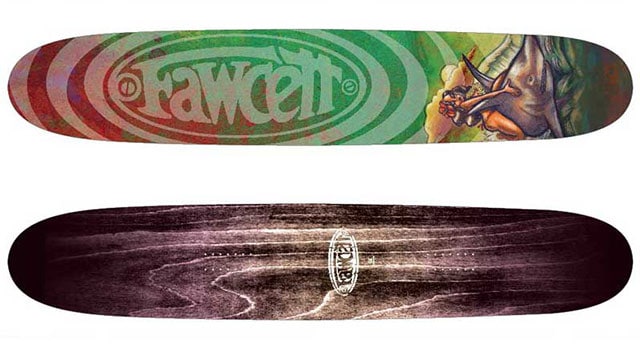 Mark Fawcett may not be as household as Craig Kelly or T-Rice, but he’s been on a board for nearly three decades and has ridden with some of the biggest names out there. During a pro stint in the 1990s, Fawcett developed his love for powder, later nurturing it as a guide on the fabled terrain around BC’s Baldface Lodge. He founded a board company to spread the passion of pow through meticulous, single-purpose design.

Fawcett feels that the average snowboard tries too hard to perform across all snow conditions. In doing so, it creates a sort of ‘good for all, great for none’ quality that limits performance in any one snow type. Powder is everyone’s favorite type of riding, and Fawcett seeks to enhance the mesmerizing weightlessness that every rider yearns for by designing boards for deep days and nothing but. In fact, his company isn’t shy about warning those looking for an all-mountain quiver crusher to keep on looking.

Look at a Fawcett snowboard and you may feel like you’re staring at a surfboard or old school banana board. But that sucker is meant for snow. The board’s ovally shape comes from what Fawcett calls reverse sidecut. You really don’t want to experience hardpack or icy pipe with reverse sidecut, but when used in powder, it only serves to increase your float and speed.

Fawcett drops a little insight: “This “surf” inspired shape puts the engaging point between your feet, allowing for tighter radius turns at higher speeds and the ability to draw-out long turns from the same board. This shape also has far less drag, as the tail section continues to fade inward when compared to a traditional sidecut that flares-out, acting like a brake or anchor. If you know you are in for fresh tracks, and seek the “surfy” sensation, this is the board for you.”

Fawcett draws the conclusion that not only is a traditional concave edge shape counterproductive to powder riding, but so are the edges themselves. Fawcett’s wood snowboards have no stainless steel along the edges, dropping one more convention of snowboard construction. You really don’t use edges in powder riding, so why waste the steel on something that’s just going to weigh and slow you down?

Like noboard manufacturers, Fawcett is deep into promoting that dreamlike connection with Mother Nature that comes when gliding effortlessly across an acres-wide stash of pure, uninterrupted white. Unlike noboarders, Fawcett believes that foot gear should be up to the individual. Some Fawcett models are designed to be surfed with or without bindings, giving users the chance to stick with what’s comfortable or experiment with the other side. The Surf Nub and Trad-Pow woodies come in a compact, easy handlin’ 150 cm length.

The Tribute 164 is available for pre-order now in solid ($575) and split ($799). Fawcett also plans to get two woodies to market by the end of 2012. Each woodie has skate-style maple construction, a waxable polyethylene base, and solid and split versions. The Trad-Pow uses a more traditional pow-fish shape, while the Surf Nub rocks the reverse sidecut like the Tribute.