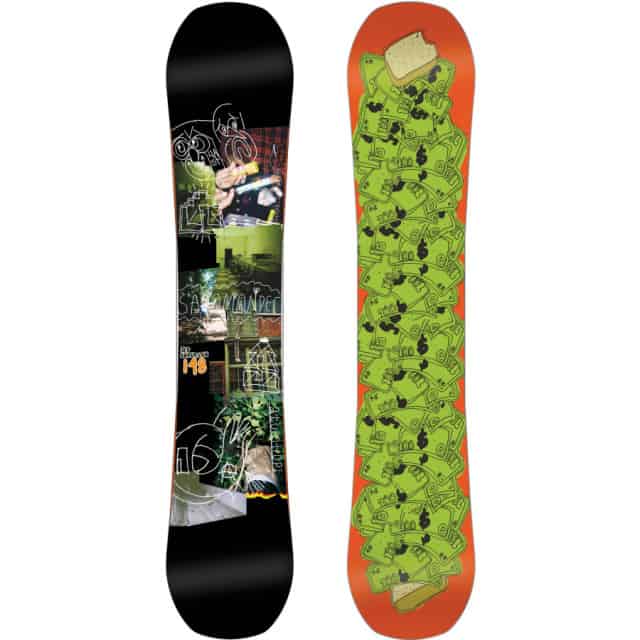 Meet the 2014 Salomon Salomonder Snowboard and insert your own witty joke about snakes here. I’ve had a long day and can’t think of a witty amphibian/reptile (what even are salamanders anyways?) to describe this board.

What I can do, however, is tell you that the Salomonder, like nearly all of Salomon’s snowboarding wares, kicks ass. The official ride of Chris Grenier and Jed Anderson, you already know the board is awesome from the get go.

The Salomon Salomonder Snowboard has a very soft flex but comes equipped with No Chip Tips and an Aspen Strong core for extra durability and strength. These two features alone make the snowboard perfectly suited for rail-riding perfection.

Like many freestyle boards, the Salomonder comes equipped with a Super Flat profile. In fact, the profile is completely flat underfoot so that your ride is as catch-free and forgiving as possible. Buttery flex is the name of the game thanks to Biax glass and the Easy Press construction is yet another feature that makes the board incredibly durable, even when you are pressing as hard as humanly possible.

Though the snowboard has a very soft flex, it still features plenty of edge hold thanks to an EQ3 sidecut. Royal Rubber Pads are another key feature and dampen vibrations when the going gets icy and rough.

Few freestyle boards are as well-suited for jibbing madness as the 2014 Salomon Salomonder Snowboard is. If jibbing is your thing, then you’ll be pibbing (bad pun on pimpin’) on this board.