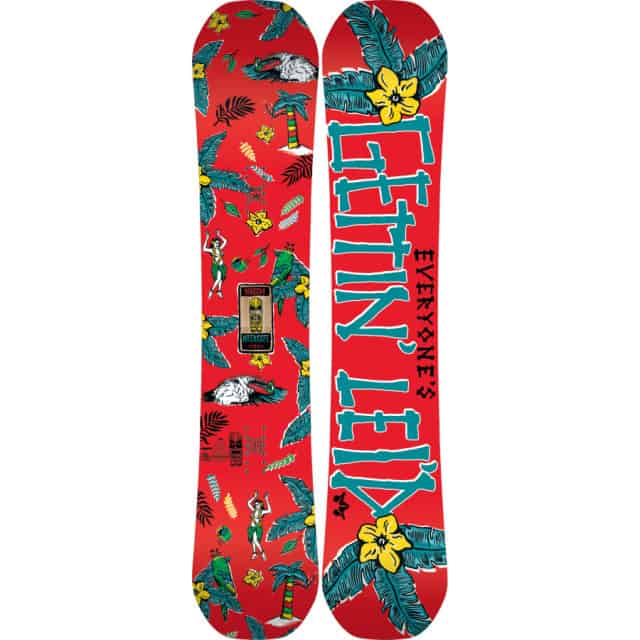 With a Hawaiian-inspired graphic, you can bring a little summer to the slopes and get Lei’d with the 2014 Rome Butterknife Snowboard.

The boys at Rome have done it once again with the 14′ Butterknife. A freestyle snowboard through and through, it features a skateboard-like feel and design that makes it easy to maneuver and push to its limits. In fact, the board’s skate-feel is so great that it’s recommended you ride a version 1-2 sizes shorter than your normal stick. The deck is basically a jibbing masterpiece.

The Rome Butterknife Snowboard incorporates a SkateCore profile to enhance its “ollie.” The profile, which is narrow between the bindings but thick at the core, makes it feel as though you’re riding the board on a set of trucks – just like a skateboard. The ButterOut transition zones are extra long and also contribute to this loose, fun feel.

Glass impact plates are included underneath your feet to further increase the Rome Butterknife Snowboard’s overall durability. They protect the core from big landings and harsh impacts. The Impact base is also extremely durable and prevents the Butterknife from getting nicked up during your runs.

There are few snowboards out there that feel as much like a skateboard as the 2014 Rome Butterknife Snowboard. If you’re equally (or more) at home on the concrete as you are on the snow, then this snowboard is definitely for you. You’ll love its loose feel, its crazy snap, and its awesome “No Hang-Ups” profile.