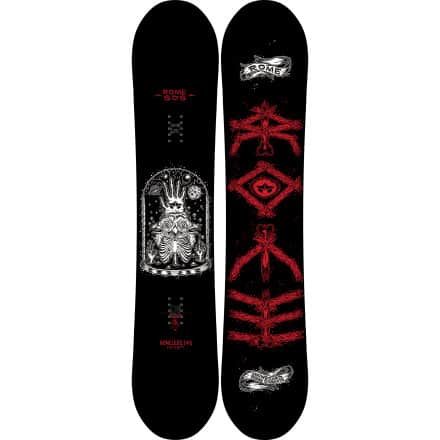 Until now, that is. With the 2014 Boneless Snowboard, the folks over at Rome have fused the influence that skating has had on snowboarding with their new 2014 product. The Rome Boneless snowboard is as close to a skateboard as a snowboard can get.

What this means for all of us is that the Rome Boneless snowboard is light, small, playful, and nimble without lacking any big board feel. Strap it on your feet and it still feels like a snowboard. Ride through the park and you’ll be amazed at just how snappy, flexible, and park-friendly the board is. It looks like a skateboard, rides like a skateboard, but it is still a snowboard with bindings and all.

I personally skateboard a lot during the summer months. Though I’m all but dying for the mountain come winter, it would still be nice to have some of that same skateboard feel on a snowboard at times. That’s what the Rome Boneless is for. It makes the transition from summer to winter all the easier on board lovers.

One of the biggest differences between the Rome Boneless and other snowboards, other than its shape, is its actual construction. It is made with 4-ply poplar that is laid up horizontally instead of vertically (as is industry standard).

Rome’s 3D Concave No-Hang-Ups Rocker-Profile is incorporated into the board’s design. This, in addition to a spoon-shaped nose and tail, ensures that you won’t catch an edge while also retaining edge control.

I like the 2014 Rome Boneless Snowboard. It feels like a skateboard and I think that’s dope. If you skate in the summer, you’ll be at home on this board in the winter.