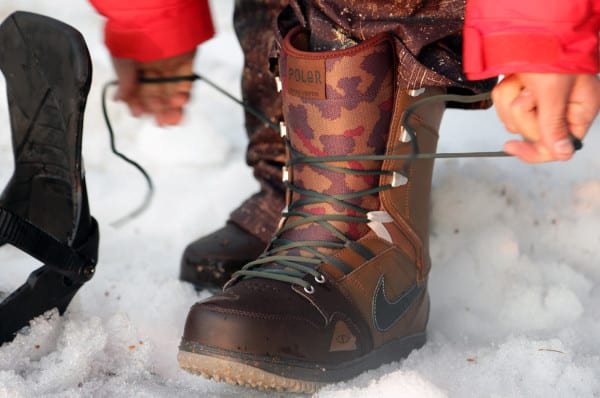 Poler Stuff and Nike have done it again with their 2014 Poler X Nike Vapen Snowboard Boot. The collab came out of a similar project between Poler and Nike Skateboarding and is the first time Poler and the snowboarding side of Nike have worked together.

The Vapen Boot is one of Nike Snowboarding’s absolute best products. It boasts a mid-flex feel that makes it the perfect choice for any type of riding. The boot is warm, high-performing, and comfortable. It features all the stability and support you could hope for without sacrificing anything in the way of board feel or maneuverability.

The highlight of the Poler X Nike Vapen Snowboard Boot is the colorway. Specially designed and inspired by the Morgan Mid 2, the boot has a camo tongue and interior liner along with other nifty highlights.

The Poler X Nike Vapen Snowboard Boot is one of the highest performing and all around best snowboarding boots of 2014. And it is far and away the coolest looking.