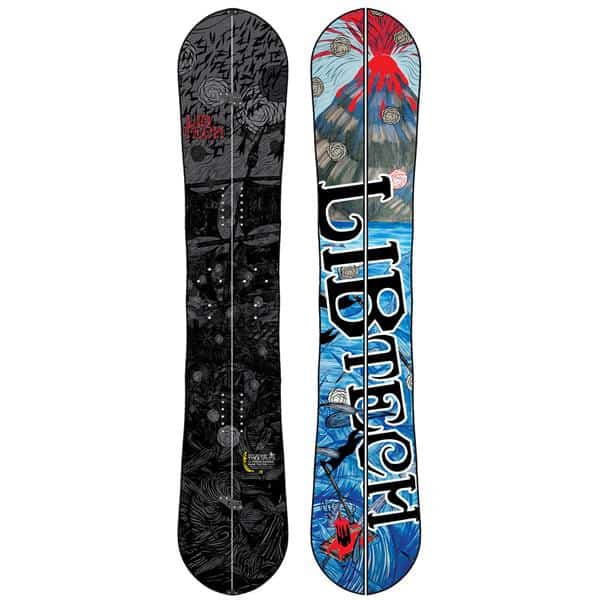 What do you get when you mesh the mind of professional snowboarder Travis Rice with the minds of the folks at legendary snowboarding company Lib Tech?

You get the 2014 Lib Tech T. Rice Splits HP Snowboard.

The board is simply the splitboard version of Travis’s favorite powder-hungry stick, paving the way for even more backcountry awesomeness.

Of particular note is the board’s super lightweight HP construction. It makes the board much easier to tug along while climbing or riding in the split setup. The HP also adds in basalt for torsional rigidity that makes the board stronger and faster. The splitboard feels exactly like a regular snowboard when you’re bombing a run.

The Lib Tech T. Rice Splits features Lib’s well-known C2 BTX camber/rocker blend. It’s the perfect match for aggressive snowboarders who will stop at nothing to get what they want. More pressure in the tip and tail of the board mean that this thing is powerful, poppy, and precise. It’s also stable, even on hard-pack and ice.

Magne-Traction means that each edge of the board is adorned with seven bumps that improve edge control throughout. They are slightly closer together between the feet giving the board the feel of a skateboard.

To wrap things up, the Lib Tech T. Rice Splits HP Snowboard features a dope graphic in the form of some artwork by Andrew Schoultz. And, like all of Lib’s boards, the T. Rice Splits is made with eco-friendly materials and was built by snowboarders with jobs.

If you’re hungry for fresh snow and you’re willing to trek to it, then there are few better choices than this Lib Tech Splitboard.