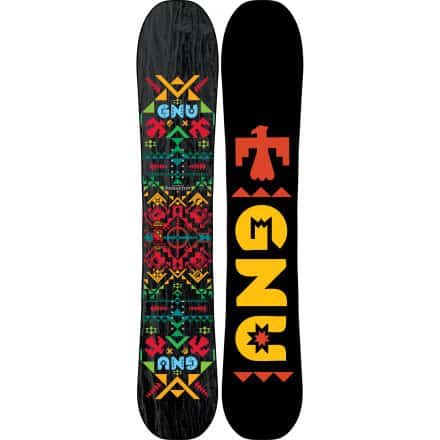 Snowboarding purist Temple Cummins knows what it takes for a snowboard to be killer. The four-time Mt. Baker Legendary Banked Slalom champion and common sight on other Cascadia slopes spends a lot of time in deep alpine powder. That’s exactly what the 2014 Gnu Beast Snowboard is designed for.

The pow literally won’t be able to handle you when you hit it running on the Gnu Beast. It’s absolutely gigantic nose makes floating over untracked terrain a breeze. True to its directional board design, the Beast also comes equipped with a kicktail that improves its overall freeride feel while adding even more float and upping maneuverability a few more notches.

But perhaps the most notable characteristic of the Gnu Beast C3 BTX snowboard is that it is just so damn fast. I mean, really. It absolutely flies and does so with high precision stability. And the camber-dominant Banana rocker makes turning at high speeds a cinch.

Being a freeride board, the Gnu Beast is also designed to provide plenty of pop. The board has a forgiving and mellow feel about it but ollies are easier than ever on it.

Finishing of this top snowboard of 2014 are its stylish graphics. Gnu teamed up with Pendleton Woolen Mills to create an absolutely stellar and eye-catching design both on the board’s bottom and its top.

If you’re an aggressive and experienced shredder who doesn’t settle for anything less than much awesome, then the 2014 Gnu Beast Snowboard is for you.