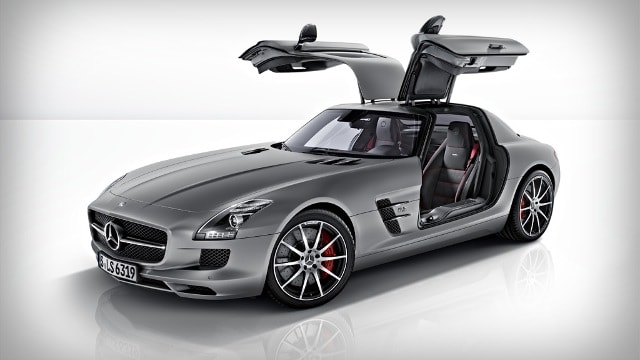 Prior to this summer, the Mercedes-Benz SLS AMG was already one of the coolest supercars on the planet. The first car designed from the ground up by Mercedes’ high-performance arm SLS, the AMG packs a 571-hp V-8 engine into a distinctive gullwing package that really doesn’t look like anything else out there (save perhaps for the classic Mercedes 300SL it was inspired by).

In other words, Mercedes sporty flagship didn’t need any updating to make it special. But time and car designs move on, and Mercedes felt it time to deliver some slight but noticeable tweaks to its halo sports car. The 2013 SLS AMG GT is the manifestation of that tweaking. Instead of just offering the GT variant as a package, Mercedes committed to replacing the older SLS AMG so that all buyers benefit from the latest in performance and design.

The already potent, agile ride of the SLS AMG is tweaked with an increased output to 583 horsepower, a recalibrated AMG Speedshift 7-speed automated manual transmission and redesigned suspension. A car that’s won more than three dozen awards in less than three years promises to enthrall the masses (or 1 percent, at least) even more.

Mercedes says the new SLS AMG has quicker, more reactive shift times and more aggressive suspension tuning – both of which should benefit drivers on the track and road alike. In terms of performance specs, the 0-60 mph time loses a tenth of a second, down to 3.6 seconds. Those looking to eke out a few extra mph’s on the top end will be disappointed , however, as the GT’s electronics still cut acceleration off frustratingly close to 200 mph (197 mph).

Ensuring that the jealous masses looking on know you’re pressing pedal in Mercedes’ latest hardware, the GT gets a few distinguishing styling elements – red brake calipers, darkened headlights and taillights, and a new high-gloss black finish around parts of the grille, hood, fenders and mirror caps. Of course, a “GT” designation is also tattooed on the rear.

The interior provides that perfect mix of Mercedes-level luxury and track-inspired performance. A pair of leather sports seats keep you comfortable and in tune with the road, while an AMG Performance steering wheel with Alcantara grips connects you directly. The red that adorns the cabin stitching, floor mats and seatbelts conveys a clear sense of performance and speed.

If all that isn’t upgrade enough, Mercedes also offers the AMG designo STYLE package as an option. The exclusive package includes upgraded interior and exterior equipment and trim in three different color combinations. It wraps the cabin in designo leather and porcelain-colored Alcantara and slaps diamond quilting on the seats and door panels.

The 2013 SLS AMG GT will officially replace the SLS AMG in the US market this November. It will be available in both hard-top and roadster varieties. Mercedes has yet to announce pricing, but it will most certainly be north of the 2012 SLS AMG $189,600 base price. Options include carbon fiber interior trim, a carbon ceramic braking system, and a Bang & Olufsen BeoSound AMG surround sound system.