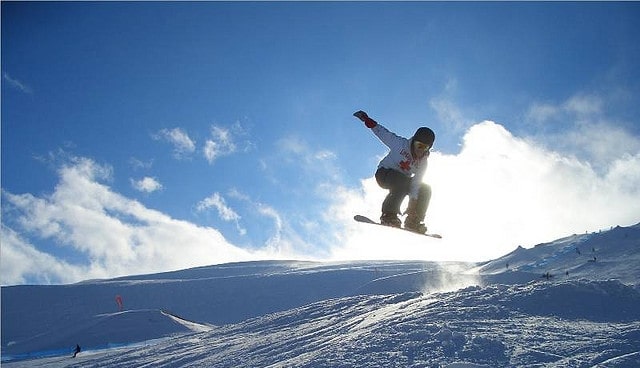 These days, it seems like there is an app for almost everything – even for snowboarding. Yep, that’s right, this season more snowboarding apps than ever are available for smartphone users who hit the mountain on a regular basis. And get this: some of them are actually good. We’ve taken the time to weed through the good, the bad, and the plain ugly as far as apps go and have picked out the 10 best that every snowboarder must have before heading out to the hill this winter.

The Snow Report: FREE
If you’re the type of person that is constantly checking the weather report before heading out to the mountain (hey, isn’t that every snowboarder?), then the Snow Report app for iOS is for you. It delivers up-to-date info on trail conditions, snow measurements, and avalanche advisories in addition to a standard weather report. Plus, it gives you the low-down on lodging in the local area. The best part about the Snow Report is that it’s made by the folks over at North Face so you know that it is built for snowboarders by snowboarders.

iTrailMap 3D: $4.99
Another app that is currently only available on iOS (sorry Android users), iTrailMap 3D lets you download trail maps from over 750 ski resorts around the world before you head out for the day. Then, when you’re actually at the mountain, you can view the map without an internet connection. iTrailMap 3D lets you view your trail maps in both a flat map view and a 3D view.

GasBuddy: FREE
Definitely one of the most useful apps of all time, GasBuddy can save you a ton of money on fuel during a season of snowboarding, especially if you live a long way from the mountain. The mobile app is available for both iOS and Android and instantly gives you an up-to-date list of the cheapest gas in your area. It tells you how far you are from each station, the price per gallon, and the grade of gas.

SnowEdge: FREE
Even though this app eats through your battery life (because your phone needs to stay “on” the entire time that it is in use), SnowEdge really is state-of-the-art. It records a ton of data from your ride including your speed, acceleration, and air time. It’s fun to compare the different forces that you and your board create on different types of runs or in different snow conditions. SnowEdge is currently only available for iOS.

AlpineReplay Ski & Snowboard: FREE
One of the most thorough snowboarding apps around, AlpineReplay is similar to the SnowEdge app in that it logs a plethora of data about your runs. But in addition to tracking your speed, acceleration, and airtime it also gives you info on your calories burned, number of jumps, and total distance traveled. The buttons on the application are super big so that you can push them without taking your gloves off. You can track your snowboarding data on AlpineReplay with both iOS and Android.

SnoCru: FREE
Another snowboarding app that works with both iOS and Android, SnoCru does it all. Seriously though, you can check snow reports, access data on your max speed, total vert, and total distance, and easily share your run info through their social sharing tool. If you sign up to become a “Cru Member,” you can even collect karma points (which are sort of like snow-based Foursquare badges) based on a number of fun, if superfluous, challenges.

ActionShot: FREE
One of the coolest camera-based apps around, ActionShot allows iOS users to create action sequences much like those that you see in any good snowboarding magazine. The app lets you choose the number of pics per sequence (2-9) and set the interval that the shots are taken (1s-250ms). You take the photos with it just like you’re filming video and then edit the stills into a sequence afterwards.

Ullr Labs Mobile Avalanche Safety Tools: $10 Android, $12 iOS
If you frequently venture past the tape and into the backcountry, then Avalanche Safety Tools is one app that you must have. Created by Ullr, it comes equipped with a GPS, compass, and clinometer (a device that measures the angle of a slope). It also provides up-to-date avalanche forecasts and snowpack condition information. Though the app will never replace an avalanche training course, it’s another safety tool that is essential for backcountry snowboarders.

REALSKI: FREE
Available for iOS, RealSki is the first augmented reality mobile app geared towards snowboarders. It works much like a digital trail map except that it also utilizes your phone’s compass, camera, and GPS features to overlay points of interest on the mountain. Basically, just hold your phone up, point the camera at an object (like a specific run, chairlift, or lodge), and the app will give you the name of that object.

Elevation Pro: $0.99
This simple app tells you what your current elevation is. It doesn’t seem like much to fuss over but it’s actually kind of neat to use while you’re riding the chairlift, before you begin your run, or when you’re taking a breather after a big spill halfway down the mountain. You can even Tweet your current elevation from the app itself – a pretty fun way of rubbing in the fact that you’re having fun in the snow to your friends stuck at work.

Have you used any of these snowboarding mobile apps before? Do you know of any others that are Much Awesome? Let us know in the comments below.